Here's a slightly different technique with stencils, which I think is pretty cool. Instead of using them to add paint or ink, why not use them as a template to selectively subtract part of your background paper? That's what I've done here with Michelle Ward's Hash Pattern Stencil from The Ink Pad. 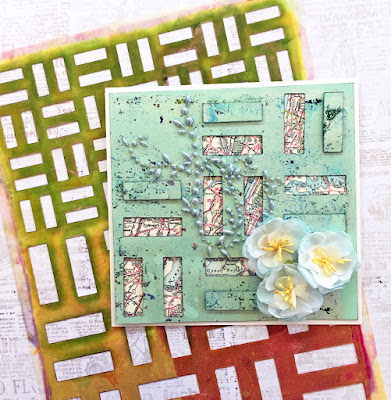 Recently I've been having fun using my punches and dies to create negative space, but this is the first time I've used a stencil that way. It won't be the last though, I can tell you that! To create the Hash Pattern on this card, I just traced the larger scale of the pattern with a pencil on this pretty mint green paper. Then I used my Xacto knife to carefully cut out some of the rectangles, which gave me little windows arranged in that fun pattern. By working neatly, I was even able to save some of the cut out pieces, ink the edges, and mount them on foam tape on top of the card, so it extends the pattern into a whole additional layer! 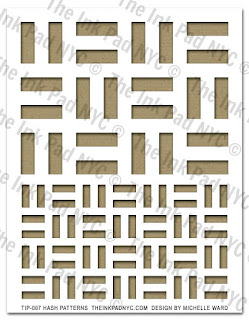 When I completed the Hash Pattern design, I mounted it over a vintage map of Greater New York, and trimmed the panel so it would fit perfectly at the center of my 6" square card. Then I added a few dimensional flowers to anchor the design, and snipped apart a pearl flourish to extend diagonally across the card. 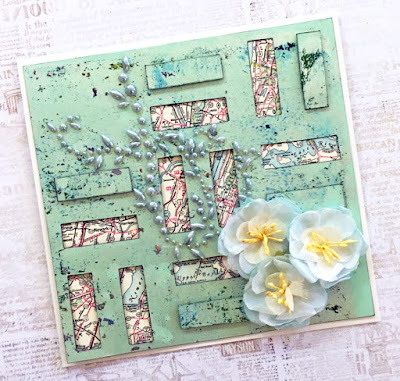 I hope you'll be inspired to dust off a low tech tool... like an Xacto knife... and take your stencils to the next level! 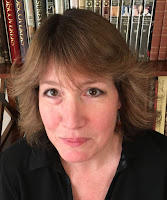 Lauren Bergold
lives in New Jersey with
LOTS of art supplies
and ONE very patient husband!