Don't worry, there's absolutely NO sewing required! In fact the only supplies you need are stickers and washi tape. Mine are by Pepin and from The Ink Pad, naturally! 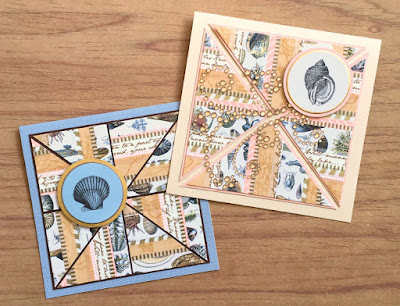 Before you start thinking, "I am not going to spend the rest of my life applying small strips of tape to tiny triangles of cardstock!" lemme essplain The Trick: We're only going to apply strips of tape to ONE SQUARE of cardstock. It can be any size, but it is fairly important that it is SQUARE... and it's got nice, neat, right-angled edges, so a good trimmer is essential. You'll want to completely cover the square in strips of tape. I like to go diagonally and work in fairly parallel lines, but the main thing is to cover the square, then trim the excess tape off the edges. Here is my fully covered, half-trimmed, 5.5" square: 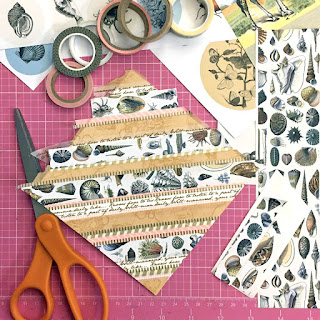 I used strips of Shell Tape from Pepin's Natural History Label and Sticker Book and filled in with neutral tapes from my hoard... ahem... I mean collection... of washi! But literally any combination of tapes you like together will work. It's also good to have a little bit of variety of width, which you can get by either using different-sized tapes OR by overlapping them. When your square is fully covered and has nice neat edges, you are going to use your trimmer to cut it in half diagonally; then cut the two resulting halves diagonally, as well. So you will have FOUR triangles, of exactly the same size and shape. Like this: 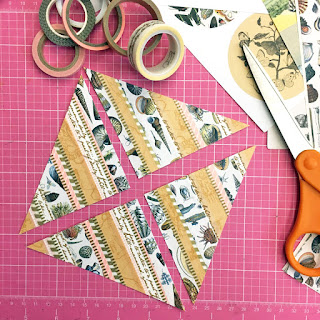 You can stop right there, re-arrange your triangles, and get a nice quilt-inspired effect. Or... you can cut each of your four triangles in half again: 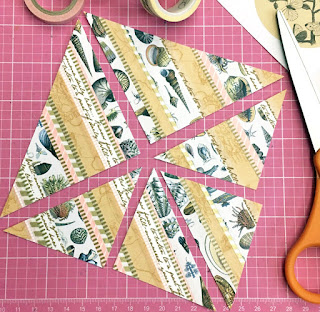 This would be a good time to mention that BOTH of my cards are made from that one 5.5" tape-covered square. Because one of the ways to emphasize the quilt effect is by separating the triangle sections a bit; another is matting them before rearranging the sections and adhering them to your card. So when I had my original square cut into eight triangles, I took four of them, matted them on soft pink, and adhered them to a 5" square, soft tan card. Then I added a matted Shell Sticker from the same book, and embellished with an Eyelet Outlet Gem Flourish. Which is how I got this: 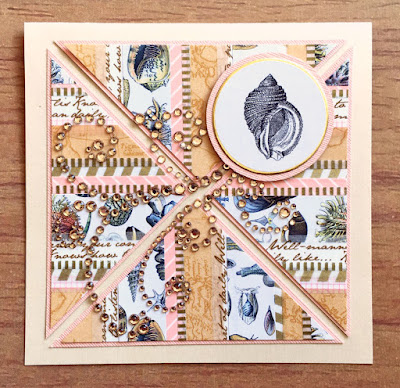 Then I took the four remaining triangles, and cut each of them in half again. Instead of individually matting all eight of my new, smaller, triangles, I just rearranged and adhered all of them to a 4" square of dark brown cardstock, leaving a small space between the pieces. Then I adhered the finished square to a 4.5" blue square card, added one more matted round Pepin Shell Sticker, and got this: 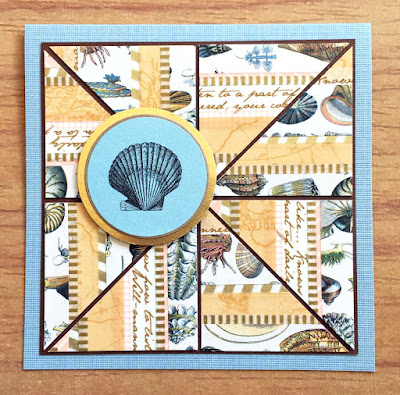 For even more options, you could make multiple tape squares, in contrasting colors, and combine triangles from several. There are probably as many ways to re-arrange and re-combine the triangles as there are crafters. So if you try this idea, I hope you'll experiment and have fun! 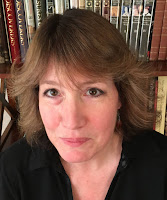 is never going to disclose just

how much washi tape she has!!!